Come to see...Get to know

During the Golden Era of the Khmer Kingdom, one of the ancient civilizations of this world was being created. It was the origin of Khmer art, culture, and architecture. These great inventions became one of the few wonders of the world that still amaze people throughout generations that still hold a great impact in present Cambodia society.

Angkor National Museum takes pride in revealing the royal historical path of this Golden Era of the Khmer Kingdom through state of the art multimedia technology to provide visitors a full pictorial story of the legend for easy comprehension.

Angkor National Museum will take its visitors through the journey back in time from the creation to the highest point of Khmer civilization. Through the use of interactive exhibits, visitors will develop a deeper understanding of customs, traditions and different beliefs of the ancient empire. A tour of the museum will be joyful for both visitors who have a good understanding of ancient Khmer civilization and visitors who do not have any previous knowledge of the ancient Khmer empire. All artifacts are divided into 8 galleries in the order of the evolution which are enhanced by a realistic atmosphere. Throughout the whole experience Angkor National Museum will allow this legend to slowly reveal before your eyes.

The 8 gallery of Angkor National Museum

Buddhism is spiritually linked to the Khmer people up to the present day. The gallery of 1000 Buddha exhibits the most prestigious collections of Buddha statues ever assembled.

Visitors can observe several kinds of material used for these statues and learn the Buddha’s stories through Buddha’s postures and gestures.

One of the mysteries is how the Khmer Empire was established. Explore the people faith and delve into the stories of the ancient Khmer Kingdoms.

Religions and beliefs of the ancient Khmer empire had both direct and indirect effects on all aspects of people living, including literary works, sculptures, architecture.

Visitors will learn many exciting mythologies and unique folk tales that motivated the civilization of Angkor for centuries.

History shows that there were four particularly notable Khmer kings who flourished the Khmer Empire, one of the world’s greatest civilizations on earth. Let the historical pride come alive through time and the stories of the four great inventors unfold.

Angkor Wat is the most significant example of the earth paradise. Its unique architecture was erected by an engineering marvel that still astonishes specialists today. A visit to the Museum would bring closer to Angkor Wat and learn how the world largest Hindu temple was constructed, thus maximizing the splendor that visitors will feel upon seeing the real Angkor Wat.

Explore Angkor Thom, the great capital, an architectural master piece of sophisticated technology combined with precious artworks ever created. The changes in religious beliefs are seen throughout the design and artwork in this splendid city. Learn about astonishing ancient engineering plans and its relation to the symbolic of the story of churning the ocean of milk (the immortal city).

The stone inscriptions, found throughout the country, record important historical events and are the evidence of the ancient language of the region. Such inscriptions provide us with a window back in time to the lives, beliefs, and various legends of the ancient Khmer empire.

Another spectacular piece of art is the ancient dressings of divinities and celestial dancers or Apasara in different styles and ornamentations. In the ancient Khmer civilization, dressings and ornamenting were also related to hierarchy and reflected the ranks of social status. Let your eyes open wide to the exquisite fashion of a land from the past. 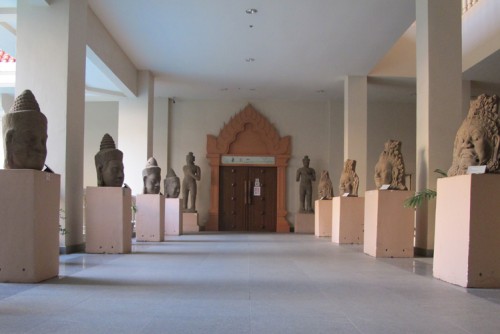 Come to see...Get to know The Legend Revealed

Angkor National Museum takes pride in revealing the royal historical path of this Golden Era of the Khmer Kingdom through state of the art multimedia technology to provide visitors a full pictorial story of the legend for easy comprehension.